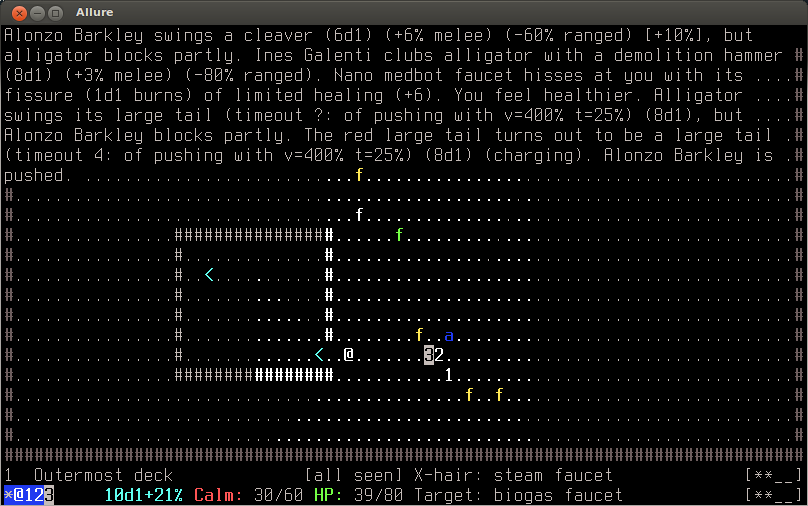 [Allure of the Stars] 6 is a near-future Sci-Fi [roguelike] 2 and tactical squad game. Have a look at PLAYING.md or jump straight into the fray. 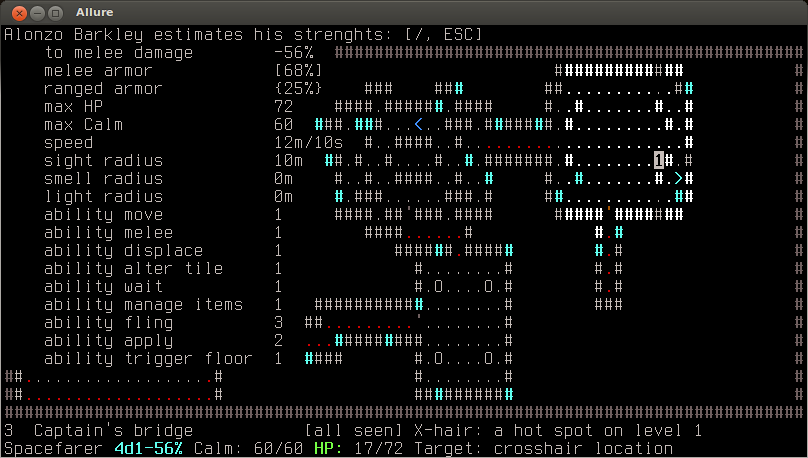 The game is written in [Haskell] 1 using the [LambdaHack] 10 roguelike game engine. Long-term goals of the project are high replayability and auto-balancing through procedural content generation and persistent content modification based on player behaviour.

Pre-compiled game binaries for some platforms are available through the [release page] 11 and from the [Nix Packages Collection] 12. To manually install a binary archive, make sure you have the GTK libraries suite on your system, unpack the Allure archive and run the executable in the unpacked directory.

The game UI can be configured via a config file. A file with the default settings, the same as built into the binary, is in GameDefinition/config.ui.default. When the game is run for the first time, the file is copied to the official location, which is ~/.Allure/config.ui.ini on Linux and C:\Users\<username>\AppData\Roaming\Allure\config.ui.ini (or C:\Documents And Settings\user\Application Data\Allure\config.ui.ini or something else altogether) on Windows.

Screen font can be changed and enlarged by editing the config file at its official location or by CTRL-right-clicking on the game window.

If you use the numeric keypad, use the NumLock key on your keyboard to toggle the game keyboard mode. With NumLock off, you walk with the numeric keys and run with SHIFT (or CONTROL) and the keys. This mode is probably the best if you use mouse for running. When you turn NumLock on, the reversed key setup enforces good playing habits by setting as the default the run command (which automatically stops at threats, keeping you safe) and requiring SHIFT (or CONTROL) for the error-prone step by step walking.

If you don't have the numeric keypad, you can use laptop keys (uk8o79jl) or you can enable the Vi keys (aka roguelike keys) in the config file.

If you want to compile your own binaries from the source code, use Cabal (already a part of your OS distribution, or available within [The Haskell Platform] 7), which also takes care of all the dependencies. You also need the GTK libraries for your OS. On Linux, remember to install the -dev versions as well. On Windows follow [the same steps as for Wine] 13. On OSX, if you encounter problems, you may want to [compile the GTK libraries from sources] 14.

The latest official version of the game can be downloaded, compiled and installed automatically by Cabal from [Hackage] 3 as follows

For a newer version, install a matching LambdaHack library snapshot from a development branch, download the game source from [github] 5 and run cabal install from the main directory.

If you are using a terminal frontend, numeric keypad may not work correctly depending on versions of the libraries, terminfo and terminal emulators. The curses frontend is not fully supported due to the limitations of the curses library. With the vty frontend started in an xterm, CTRL-keypad keys for running seem to work OK, but on rxvt they do not. The commands that require pressing CTRL and SHIFT together won't work either, but fortunately they are not crucial to gameplay. For movement, laptop (uk8o79jl) and Vi keys (hjklyubn, if enabled in config.ui.ini) should work everywhere. GTK works fine, too, both with numeric keypad and with mouse.

The Makefile contains many sample test commands. Numerous tests that use the screensaver game modes (AI vs. AI) and the dumb stdout frontend are gathered in make test. Of these, travis runs test-travis-* on each push to the repo. Test commands with prefix frontend start AI vs. AI games with the standard, user-friendly gtk frontend.

For more information, visit the [wiki] 4 and see PLAYING.md, CREDITS and LICENSE.