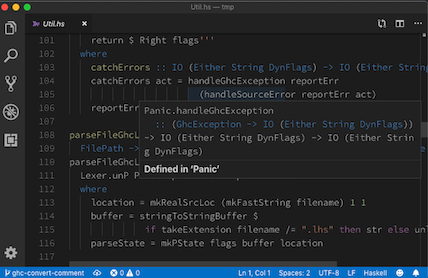 ghcide supports loading multiple components into the same session so that features such as go-to definition work across components. However, there are some limitations to this.

ghcide is not an end-user tool, don't use ghcide directly (more about the rationale here).

The instructions below are meant for developers interested in setting up ghcide as an LSP server for testing purposes.

Note that you need to compile ghcide with the same ghc as the project you are working on.

ghcide has been designed to handle projects with hundreds or thousands of modules. If ghci can handle it, then ghcide should be able to handle it. The only caveat is that this currently requires GHC >= 8.8, and that the first time a module is loaded in the editor will trigger generation of support files in the background if those do not already exist.

The Haskell extension has a setting for ghcide.

Here's a nice article on setting up neovim and coc: Vim and Haskell in 2019 (this is actually for haskell-ide, not ghcide)

Here is a Docker container that pins down the build and configuration for Neovim and ghcide on a minimal Debian 10 base system: docker-ghcide-neovim.

Change kak-lsp.toml to include this:

To build and work on ghcide itself, you should use cabal, e.g., running cabal test will execute the test suite. You can use stack test too, but note that some tests will fail, and none of the maintainers are currently using stack.

If you are using Nix, there is a Cachix nix-shell cache for all the supported platforms: cachix use haskell-ghcide.

If you are using Windows, you should disable the auto.crlf setting and configure your editor to use LF line endings, directly or making it use the existing .editor-config.

If you are chasing down test failures, you can use the tasty-rerun feature by running tests as

This writes a log file called .tasty-rerun-log of the failures, and only runs those. See the tasty-rerun documentation for other options.

If you are touching performance sensitive code, take the time to run a differential benchmark between HEAD and master using the benchHist script. This assumes that "master" points to the upstream master.

Run the benchmarks with cabal bench.

It should take around 15 minutes and the results will be stored in the bench-results folder. To interpret the results, see the comments in the bench/hist/Main.hs module.

The code behind ghcide was originally developed by Digital Asset as part of the DAML programming language. DAML is a smart contract language targeting distributed-ledger runtimes, based on GHC with custom language extensions. The DAML programming language has an IDE, and work was done to separate off a reusable Haskell-only IDE (what is now ghcide) which the DAML IDE then builds upon. Since that time, there have been various non-Digital Asset contributors, in addition to continued investment by Digital Asset. The project has been handed over to Haskell.org as of September 2020.